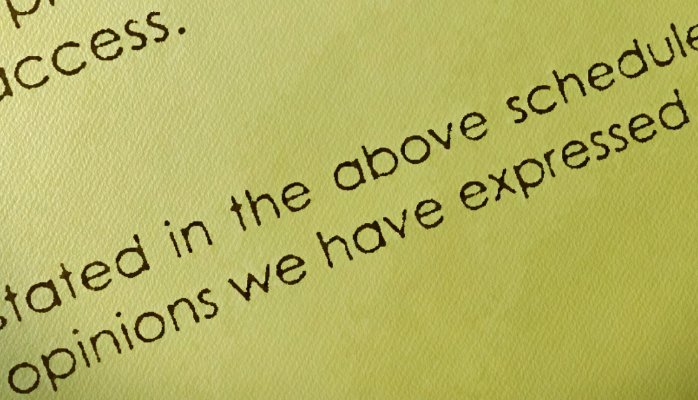 When boundary disputes reach court, judges quite rightly like to hear expert evidence to assist them in determining the dispute. Such evidence is, in the first instance, in the form of a written report, to which is attached, as appendices one or more plans, including, most importantly, the measured site survey discussed in my last article.

I have seen a wide range of experts’ reports over the years, some good, some bad, some downright ugly. So what makes a good expert’s report? Here are my top 5 tips:

(1) Above all else, include a measured site survey. Although it might be possible to imagine a case where this would not help – where all boundary features and buildings within 100 metres of the disputed boundary have been removed without trace for example – in 99% of cases this will be the most important element of the report;

(2) Explain why you are an expert – while this is often done primarily in the form of a curriculum vitae appended to the body of the report, it is important that you establish your expertise before the court; otherwise, the court will have no reason to accept your expert opinion. If you are expressing an opinion as to a boundary line based upon interpretation of an aerial photograph, for example, you had better have training and experience in such matters;

(3) Make sure you have understand your duties as an expert, primarily that your duty is owed to the court, not to the party paying your bill. Personally I would recommend reading part 35 of the Civil Procedure Rules (and the practice direction accompanying it) each time you prepare an expert’s report, to ensure that you have at the very forefront of your mind what is required of you, and that the expert’s declaration at the end of the report is correct. A good friend of mine at the Bar has traditionally asked, as his first question in cross-examination of the other side’s expert “Who are you here to help?”. On one memorable occasion, the judge immediately interjected “Me, of course!” to which my friend responded “Your honour, I know that, and your honour knows that, but I asked the question because, having read his report, I am not sure the witness knows that”.

(4) Be aware of, and point out explicitly, what the width of a line on the plan, and the width of the same line on the ground represents. Similarly, be conscious of, and where appropriate, comment both upon the practical limitations which plans at smaller scales represent in terms of boundary disputes, and (where Ordnance Survey maps are relevant) what the margins of error for such maps are. The latter point can quite properly be dealt with in a standard appendix;

(5) Differentiate between matters of law, and matters of surveying opinion. Hence “From the plans it would appear that the wall (or a similar wall) has been in its current location for approximately the last 25 years” is fine, but adding the words “and I therefore conclude that the Claimant has acquired title to the disputed land by reason of adverse possession” would be inappropriately trespassing into judicial/legal territory. Instead one should say words to the effect of “What if any effect the existence and location of this wall has on the current boundary line is a legal matter and I do not comment on the same”.

While I will not include it as a specific “top tip”, and most surveyors are aghast when I say it, an expert surveyor’s report does not necessarily have to express an opinion as to the “correct” line of the boundary at all. Indeed, it is commonly the case where it would be downright inappropriate to do so. If you are going to express an opinion as to a boundary line, make sure you do not express that opinion in terms which are more specific or more certain that you can properly or reasonably be – otherwise you will just be making my job (in cross-examining you) too easy!

While the expert’s report (and its defence in court) often represents the final input of surveyors into the resolution of boundary disputes, I plan to write one further article dealing with mediation as a method of resolving boundary disputes.